Bromley Symphony Orchestra is a large and successful amateur orchestra based in south London with a reputation for interesting concerts of almost professional standard. We give four concerts a year at Langley Park Centre for the Performing Arts and occasionally a summer workshop.

The orchestra was formed in 1917 by Miss Beatrice Fowle and Miss Gwynne Kimpton, teachers at Bromley High School for Girls, the latter of whom became its first and very successful conductor. The earliest concerts were given under the title “Bromley Patriotic Orchestral Concerts” with the double object of raising public morale as well as helping to raise funds for war charities. The early concerts given by the Orchestra would have seemed unusual to our modern ears,  used to the typical overture-concerto-symphony structure or similar. The oldest programme we have seen, for example, 17 November 1923, included not only Beethoven’s Fourth Symphony and the Tchaikovsky Violin Concerto (with Jelly d’Arányi) but also various songs for voice and piano (John Voss and Phyllis Norman-Parker) and Quilter’s Children’s Overture.

The orchestra’s leader was Marjorie Whyte, who had close connections with Adrian Boult; they had studied together in Berlin before the 1WW. On the back of this, it appears that Whyte was able to obtain the services of WH (Billy) Reed as conductor (as well as a regular guest appearance by Sir Adrian himself). Reed was leader of the London Symphony Orchestra which Boult conducted at the end of the first World War.

The orchestra was known as the Bromley and Chislehurst Orchestra around the time of World War II. A succession of world-class artists appeared with the orchestra at the Central Hall (until it was destroyed in 1942 in an air raid) and later at the Boys’ County Grammar School (now The Ravensbourne School). Guilhelmina Suggia played the Lalo Cello Concerto in February 1936, and Jan Smeterlin the Rachmaninov Third Piano Concerto the following month. The great Hungarian violinist Jelly d’Arányi (dedicatee of Bartók’s violin sonatas) appeared at least twice before the 2WW. Albert Sammons played Dyson’s Violin Concerto with the composer (February 1946). Kathleen Ferrier sang a clutch of arias, and Moura Lympany played the second Rachmaninov Concerto. Emanuel Feuermann played Haydn’s D major Concerto in February 1934. We believe Leon Goossens gave his first London performance of the Vaughan Williams Oboe Concerto at the Wigmore Hall with the Bromley and Chislehurst Orchestra on 4 May, 1945. The performance was originally scheduled for the Promenade concert on 5th July 1944 but this was cancelled due to bombings.

Today the Whyte family house is the Ripley Arts Centre and many will have enjoyed the splendid music room and the lovely garden it opens onto. Marjorie led the orchestra from its inception (according to Boult) and conducted on occasion after Billy Reed died. Dorothy was the principal viola, Jessie principal cello, and Joyce led the second violins.

It was on Marjorie Whyte’s suggestion that a young conductor called Norman del Mar came to the conductorship of the Orchestra. He conducted the last concert of the 1951/52 season and stayed for nearly ten years!

John Coulling, principal viola of the LPO and later the BBC Symphony Orchestra, appeared as guest conductor for the last concert of the 1961 season. He presided over four major changes in the Orchestra in his subsequent 20-year stint as conductor, gradually moving it away from the way it had generally operated since its inception. First, was the passing of Marjorie Whyte, leader for some 45 years or more, on 2 August 1963. She was succeeded by Stanley Castle, violinist in the LSO, who had already appeared as a guest leader on a couple of occasions; Second, was the gradual phasing out of imported professional wind and brass players from the London orchestras; Third, the orchestra was rearranged so that the ‘cellos and double basses were on the right of the conductor on an extended platform; Fourth, the rehearsal venue for many years had been the Robert Whyte Hall at 33 London Road. Following an increase in the hire charges, St George’s School, Tylney Road, Bickley became the regular venue in 1970 – until the Orchestra outgrew its modest hall in 2010 (it now rehearses at Bishop Justus School).

John Coulling announced his intention to retire in 1979. Prospective conductors were auditioned by taking part of a rehearsal; by all accounts, Adrian Brown was the stand-out candidate. By the time of the call about Bromley, Adrian had been busy in numerous conducting roles. While at the Academy he formed the North London Sinfonietta (with Simon Rattle on timps), as well as appearing with several other local orchestras. Hugh Bean (BBC SO and Beckenham resident) played the Beethoven concerto with him and became a firm friend. Adrian had started to conduct the Stoneleigh Youth Orchestra in 1972 (where he stayed 40 years!) and the Glasgow Youth Orchestra from 1973-1977. He remains the only British conductor to have reached the finals of the Herbert von Karajan International Conducting Competition in Berlin in 1975. He conducted the BBC SO in 1976 and the Salomon Orchestra in 1979. He was offered the job of conducting the Insurance Orchestra but they rehearsed on Mondays and he turned them down for Bromley!

Bernard Brook was our leader between 1989 and 2012, having joined the orchestra in May 1981, and has also been soloist with us in many compositions, including the Bliss Violin Concerto, Prokofiev’s Second Violin Concerto and Vaughan Williams’ ‘Lark Ascending’. He lead the Militaire Orchestra, for many years performing at venues such as the Mansion House and Guildhall in the City of London, and the Royal Naval College Greenwich. Our present leader, Andy Laing, has also led the Morley College Symphony Orchestra, the Ealing Symphony Orchestra, the Hatfield Philharmonic, the Forest Philharmonic, the London City Ballet Orchestra and in the 1990s spent much time on stage at the Royal Shakespeare Company.

There has been a gradual widening of the Orchestra’s repertoire in recent years. Many amateur orchestras have played Beethoven Symphonies and a smattering of Mozart and Schubert. But few will have tackled the Bliss Colour Symphony, all bar a couple of the Mahler Symphonies, the symphonies of Prokofiev, Nielsen, Rachmaninov, Shostakovich, Sibelius and Walton, or the major ballet suites by Ravel and Stravinsky. We have also been lucky enough to give one of the early performances of Elgar’s Symphony no 3 in the “elaboration” by Anthony Payne (former BSO President) and to play The Planets, a work that Adrian Brown had studied with Boult using his original score with Holst’s markings! And who could forget Act 1 of Die Walküre, with Janice Watson, John Upperton and Oliver Gibbs in 2014, some of the most dramatic and technically difficult music the Orchestra has ever performed.

Most members obviously come from Bromley and surrounding areas including Beckenham, Orpington, Bickley, Chislehurst, Sidcup, West Wickham and Croydon. But quite a few do travel further – for example, we have members who come every week from Crowborough, Carshalton, Blackheath and Barnet. 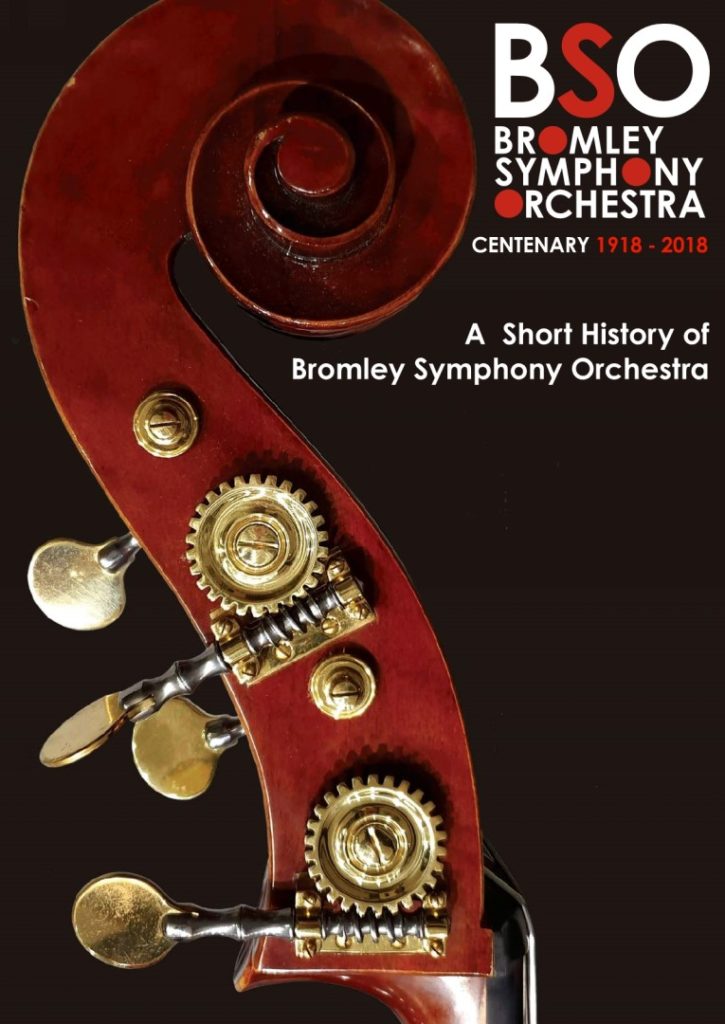 Here’s a short video from 2012 about the orchestra:

There are more photos and recordings on our archive pages. You can also find us on Facebook and Twitter. 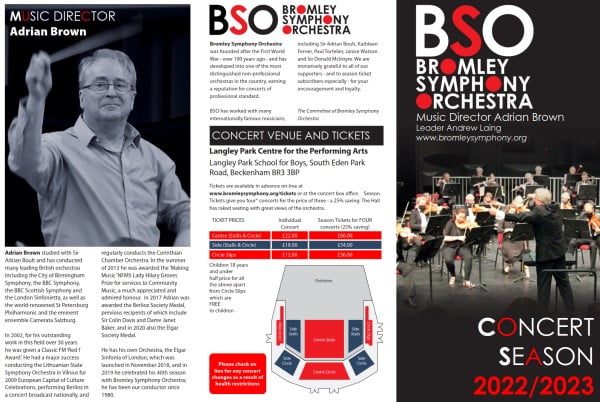 Click, tap or focus your camera on the QR code or follow these instructions to view automatically updated concert information in your calendar.