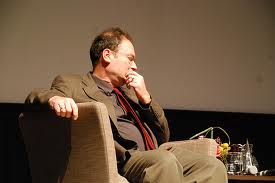 “Adrian Brown has been at the helm for forty seasons; still the only British conductor to have reached the finals of the Herbert von Karajan Conducting Competition in Berlin, he has raised the standards of the Bromley Symphony to a high level, as we heard throughout this centenary event…In terms of architectural and emotional structure, this account was a true revelation of Beethoven’s Ninth – this, I am certain, was throughout what the work is about. Brown had every performer with him, a quartet of truly excellent vocal soloists and a choir that sang with total commitment. Brown’s conducting was that very rare thing – a searching comprehension of the way in which Beethoven, surely, meant his work to be heard – although he, of course, only imagined it in his inner creative ear… the demonstrable respect in which Brown held his fellow-musicians contributed mightily in inspiring them to an outstanding performance.”

“What was so impressive about this performance [of Debussy’s Danse sacrée et Danse profane] was that the large string section (over 50 players) was not reduced, enabling the richness of Debussy’s wondrous orchestration to ‘sit’ splendidly as both a background and occasional foreground to [Elizabeth Scorah’s] outstanding playing. Indeed, for the first time in my experience, this masterpiece was revealed in all its inherent expressive colouration and emotional grandeur. The orchestra was expanded to 100 players (eight percussionists as well as timpani) for the final work – Ravel’s complete Daphnis et Chloé ballet. This is a score that would stretch the finest orchestras in the world, but it is rare indeed to encounter a performance of such total commitment and genuine, inherent musicianship as we experienced on this occasion.”

“The BSO and their conductor Adrian Brown are not afraid of tackling the very heights of the orchestral Himalayas…I began to relax about 10 minutes in: I’m always on edge that orchestras might be out of their depth. However, it was clear this was not going to be just an enthusiastic amateur performance [of Bruckner Symphony No. 9], there was no need to hedge with qualification or concession…Hats of to the brass, complete with four Wagner tubas. But all the players covered themselves with glory.”

“Adrian Brown and his Bromley Symphony Orchestra gave one of the finest performances [of Sibelius Symphony No. 4] I have heard in a long time. Attention to detail was superb; the opening cello melody maintained its audible course within the body of the lower strings when it is often engulfed in other performances. Little markings like the Tranquillo in the scherzo were meticulously observed thus adding interest to an absorbing and comprehensive view of a master work that remains almost totally neglected in the mainstream of our musical life in Great Britain…This is difficult music to comprehend and to play but the performance was a triumph for all concerned.”

“Adrian Brown has demonstrated time and again his qualities in Schumann’s music … a choice of tempos that truly enabled this essentially sombre and powerfully dramatic work to breathe, combined with a grasp of internal orchestral balance that once again showed the commonly-held complaint regarding Schumann’s orchestration to be much ado about nothing. Alexander Soares … delivered a quite wonderful account of this perennially-fresh masterpiece [Grieg’s piano concerto]. His was indeed a performance to savour, full of life and emotional contrasts, virtuosic, sensitive and colourful…Tchaikovsky’s ‘Manfred’ was revealed as the wholly original masterpiece it is…A magnificent evening: three truly excellent performances, for which the very large audience returned home, their belief in the essential humanity of life reinforced once more by great art.“

“Whilst it is undoubtedly true that orchestral standards in this country have improved considerably since the end of World War II – the conflict having decimated orchestras across the continent – to the point where semi-professional or even wholly amateur orchestras can programme mainstays of the 20th-century repertoire with confidence, not too many of them would feel confident today at tackling Mahler’s Seventh Symphony, its five movements and 80 minutes playing time stretching the technique and concentration of any body of players, this concert demonstrated that the Bromley Symphony Orchestra, now approaching its centenary, was fully up to the challenges it poses.”

“There was no shortage of excellent introductory material at this concert. The programme notes by principal cellist Alice McVeigh were written with such a refreshing mixture of liveliness and informed individual response to the music, that they seem to me to be a model of how such writing should be…There was a truly heart-rending moment as the development began when Caroline Marwood’s oboe delivered her sad and solitary reply to the solo horn…Often for non-professional orchestras it’s the quiet passages that present the greatest challenges, but the Bromley Symphony Orchestra showed particular accomplishment in Bruckner’s more meditative music…Flute, clarinet and horn solos were all outstanding.”

“Jamie Walton … was the soloist in an outstanding account of Elgar’s Cello Concerto, at times very moving indeed, soloist and conductor being at one in the realisation of the score. The programme concluded with a most finely-realised performance of Vaughan Williams’s A London Symphony … played with considerable love and attention to detail – and power, when called for – Adrian Brown excelling in this great music.”

“… a fine account of Elgar’s orchestration of Bach’s Organ Fantasia and Fugue in C minor … Finally came Anthony Payne’s now famous elaboration of the sketches of Elgar’s Third Symphony, of which Adrian Brown has given more performances than any other conductor. This was a noble and passionate reading of stature, thorough enjoyed by the very large and appreciative audience.”

“The conductor Adrian Brown was in total command of the complex architecture [of Sibelius’s ‘Pohjola’s Daughter’] and the orchestra gave a memorable performance … Orchestra, conductor and soloist [in Shostakovich Violin Concerto No 1] alike matched the desolate aspects of the score and the rare and beautiful melodic sections with a professionalism that now pervades the orchestra … [Tchaikovsky’s ‘Nutcracker’] weaved its traditional magic in an exciting performance by all concerned.”

“Classical compositions don’t come much bigger or more impressive than Mahler’s Symphony No 3… The orchestra was nearly double its normal size … Adrian Brown exerted total command over the singers and instrumentalists and the result was an artistic triumph. And in particular, the clever creation of distant sounds from military bands provided a few moments of real musical magic and an almost eerie realism.”

“… The performance was perfect and the conductor appears to have instilled a professional approach to all the musicians. There can be very few so-called amateur orchestras that can maintain such high standards.”

“The Corsair overture by Berlioz was bright, colourful, and exciting while Prokofiev’s complex 5th Symphony was directed with such precision by the conductor, Adrian Brown, it positively bristled with the sounds created by the composer’s supreme grasp of melody, drama and orchestration.”

“ … The orchestra’s distinguished conductor, Adrian Brown again showed that his bond with the musicians has created a highly professional ensemble which gives the term ‘amateur’ a somewhat hollow ring… The performance [of Mozart’s Symphony No 39] was exceptional and the wind instruments were outstanding in the first two movements…The warm applause at the end of the concert confirmed that the finer points [of Strauss’s Ein Heldenleben] were not lost on the audience.”